#OutFilmFestKE: The First OUT Film Festival in Kenya, A Review

I attended the first ever OUT FILM FESTIVAL in Kenya which was held at Goethe Institut, Maendeleo House. Here is a brief review of what was.

The event was held on Friday 2nd from 6pm to 8pm and Saturday 3rd the whole day. I only went on Friday and boy was it packed! See a (dark) pic I took: 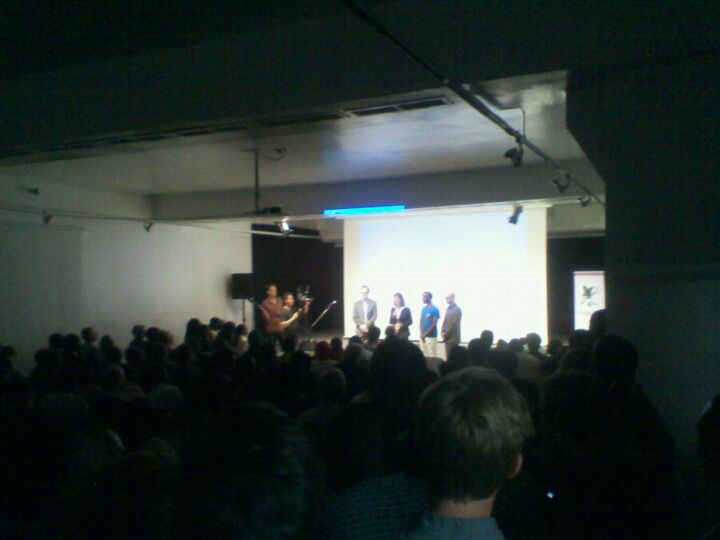 I was standing at the back! Apparently, according to this story here, the organisers anticipated for a 60pax turnout but lo and behold, 200 came!

Its easy to assume that most peeps who showed up were just curious. I for one was indeed. But my main motivation was that it was the FIRST!

Just having such an event in Kenya for me is a great stride. It means we’re moving somewhere.

I only feel sad that the reporting on that Daily Nation story was done poorly. But that’s a story for another day.

Most of the films on the list I’d already watched. Such as, Kuchus of Uganda, Milk and Transformations. It was unfortunate some of the Kenyan productions wouldn’t be viewed because of stigma and discrimination but that was understandable.

Kuchus of Uganda is a film (not well shot) about the gay people in Uganda, and especially so in Kampala. It  highlights the issues they face day to day, their joys and pains, their ups and downs. It seems it was done by a hand held camcorder but at least it captures the views of the community.

Milk is a famous famous show and I’d only direct you to Wikipedia for more details and tell you that its a MUST WATCH. Seriously.

Milk is a 2008 American biographical film on the life of gay rights activist and politician Harvey Milk, who was the first openly gay person to be elected to public office in California, as a member of the San Francisco Board of Supervisors. Directed by Gus Van Sant and written by Dustin Lance Black, the film stars Sean Penn as Milk and Josh Brolin as Dan White, another city supervisor who was Milk’s assassin. The film was released to much acclaim and earned numerous accolades from film critics and guilds. Ultimately, it received eight Academy Award nominations, including Best Picture, winning two forBest Actor in a Leading Role for Penn and Best Original Screenplay for Black.

I recommend also, in case you’ll be looking for other films, to find “Getting Out” a film by Refugee Law Project in Uganda. Its better than Kuchus of Uganda.

A week has passed and what? The last post I had was on Monday? C’mon Joliea! What the hell is going on? You can’t keep doing these disappearing acts!!! Oh well, cant blame ya much.

This week on Monday Rant! there are a few things I’d like to point out.

1. The Death of David Kato: We all have heard of this human rights defender in Uganda who was known for fighting for the rights of LGBTI Ugandans. It is so unfortunate that someone went ahead and killed him in broad daylight. Now I don’t want to go into details of how it happened and why it happened, but I do know that the greater human rights defenders‘ community is both angered and saddened by his sudden loss. Its a shame that we shall never know the real motive of why he was killed.

2. Small Roads in Kilimani: I work in the Kilimani area. For the last few years I have been around this place, one thing I shall forever keep ranting about is the state of the roads! Gosh! The roads are terrible to say the least. I dont drive. So the roads, are, well, not such a concern for me as is THE PATHWAYS!! damn! Where the eff is Kanjo? Why arent they repairing the roads properly? And whenever they do, they ALWAYS forget to fix the pathways. Case in point is that newly made section of James Gichuru Rd near The Junction. I mean, seriously? Are they that daft? Cant they see the kind of human traffic around that area and make necessary measures to ensure they are catered for? Not all of us are priviledged to be behind a steering wheel people!

3. Last but not least, ITS END MONTH PEOPLE! WUHUU! We were paid and damn was I broke! Ubaya ya January ni ati madeni tu ndio si hulipa. So if I owe you, mteja wa nambari uliopiga, ataonekana tena February! If you owe me, FYI, I am really good pals with those thugiz who did the CCK ad! And no, they were’nt just acting!

I am trying to be in a good mood. So my rant will end there. Ofcourse this does not mean I shant continue ranting, follow me on Twatter and see 🙂

Seriously, its such a glorious day in Nairobi, do I really have anything to rant about? No, why should I spoil it by saying mean and nasty things that have been bugging me for the past week? Naah.. its not gonna happen. Noserie!

Uganda and Homosexuality: I Don’t Get It!

The other day we heard in the news that a Uganda tabloid dubbed Rolling Stone stupidly stealing the name from the veteran magazine that hails from the US is on a mission to out 100 Ugandan homosexuals. On that first issue, they named and pictured 15 people. Guess what happened.

Several people have been attacked in Uganda after a local newspaper published their names and photos, saying they were homosexual, an activist has told the BBC.

Frank Mugisha (of SMUG – Sexual Minorities Uganda) said one woman was almost killed after her neighbours started throwing stones at her house.

He said most of those whose names appeared in Uganda’s Rolling Stone paper had been harassed.

Honestly, is this even human? (click on image for a better view) p.c. wthrockmorton.com

First of all, I am wondering what on earth would lead someone to stone another because of what they do in the privacy of their bedrooms. I mean, I don’t have sex on Kimathi Street, do I? So who cares what I do with my significant other? Why should it matter? And besides, even if it was a religious case, will God now give you higher scores because you stoned a sinner to death? Will he offer you some form of compensation for ridding the world of the deadly and dangerous homosexuals that came to the earth to destroy our babies and turn them to the filth that they are and die an eternal death with the everlaughing devil? Will you suddenly receive a halo over your head and be deemed holier than thou in the village because of your noble cause?

My point is, here you are throwing stones at someone who has done absolutely nothing to you, for a crime that harms you in no whatever way, and for another crime that you have no basis of judgement over, neither are you judge to rule and charge guilty or not guilty. Here you are claiming that someone trying to make sense of their world is suddenly a threat to your children’s lives. How? Considering that kissing – regardless of the sexualities of the parties involved – is deemed a taboo in our countries, how on earth would someone walking down the streets make your child a homosexual? Fine, lets even consider your irrational claims that the said homosexuals are recruiting children and infecting them with AIDS. Do you have evidence of this? Is there a way you can support these irrationality?

I still cannot fathom how someone can kill another over such. I honestly can’t. Even if I hated gayism as some people call it with all my heart, I cannot see that as a reason to kill them. Surely there must be a thread of humanity in me to restraint me from such!

This is just the beginning. I am not amused. Not at all.